White Sage and Cleansing your home and yourself 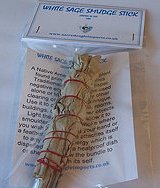 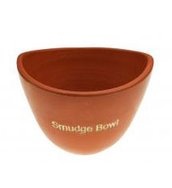 Smudging is a traditional Native American method of burning sacred herbs to produce aromatic smoke which is used in cleansing or prayer ceremonies and purification or healing rituals. It is the ritual cleansing of the mind, body and spirit. It is also used to cleanse and purify rooms and spaces.

Smudge is the name given to the dried herbs used in a smudging ceremony. These can be loose leaves or a bundle (also known as a smudge stick).

Before you light your sage, and begin the process of smudging a room or your entire home, it's best to start with a prayer and set your intention to cleanse the space and release any and all negative energies.

Carefully light your white sage at the tips of the leaves, making sure you have a fireproof bowl or plate ready to catch any ash as it burns.

Sage smudging is most powerful when simply smouldering and smoking. If your sage is burning and you can see the flame, just blow it out and you're ready to begin smudging.

As you smudge, make sure to waft the smoke up toward the ceiling and down to the floor, starting from the bottom and moving to the top. Try to get behind furniture and in all other nooks and crannies in the space.

You can use your hand, a feather, or a small paper fan to waft the smoke, or simply push the smoke where you want it to go by carefully moving the entire smudge stick (and your fireproof bowl to catch ashes) in that direction.

The last room you smudge should be the one with the front door.

When you're finished, move outside and waft around the four corners of the door.

And finally, close with a prayer of thanks.