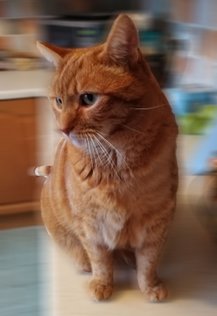 Not Word from Herbert

Allow me to introduce myself.  My name is Ignatius Grewcock, or Iggy for short.  I am the "portly red tabby" that Herbert repeatedly talks about.  People think my name Iggy, comes from a love of a rebelious singer but the truth is that I am named after a phone sanitiser that my daddy met a few years ago.  I'm as baffled as you but there you go.

You are probably wondering why Herbert isn't doing the blog this month and I shall fill you in on the gossip surrounding it.  Bear in mind that if we were to be likened to a movie duo, we would be Jay and Silent Bob.  If you're wondering, I'm NOT Jay!

Anyway, Herbert submitted his blog to our legal team for clearance before it could be put on the website and they rejected it because of some glaring untruths and some downright defamation of character of some people we know.  He was asked to correct these inaccuracies but declined in the strongest language claiming "he was the greatest blogger in the world" and that he would cause anarchy if his words were not allowed to be read in their raw uncensored format.

Needless to say, the legal team decided it would be a good idea to maybe give him a break from his blogging until he amended his ways and stopped being such a narcissist.  This brings you up to date as to why I'm this month's guest blogger. If you do want to read his previous blog then click here.

A lot has happened since the last blog, Mummy and Daddy started to disappear during the day again which meant I could concentrate on getting my required 15 hours a day of sleep anywhere I wanted.  This was so lovely, not that I don't like having them around but it does mean I get the pick of the house.

At the end of December, Mummy and Daddy stayed at home a bit more which was nice but a bit intrusive if you ask me.  Then things took a turn for the worse.  The house got cold and I mean very cold.  They started repeating a phrase about the "boiler being broken", which to be honest, as a cat, means nothing.  It did mean that myself and Herbert had to vie for warm knees to keep warm.  This went on for a few days until a lovely man came in and made the old boiler go away and a new one appear and make things warm again.

Then Mummy and Daddy stayed at home again.  This is still going on at the moment, I have kind of embraced it this time but I am having a little bit of fun at their expense by talking incessently to them.  Herbert is talking a lot too but he is largely ignored due to the narcissism thing I mentioned earlier.

Ironically, during the cold times of the "boiler being broken", Mummy and Daddy took pity on us.  I got a jumper with "Bad to the Bone" written on it, I'm convinced it was meant for a small dog but we aren't going outside any more so no-one of importance saw it.  Herbert got given an orange jumper that looked like something from a prison drama.  Some might say "he was in peach"!

I have been sat down with Daddy watching a show called "Curb Your Enthusiasm" which depected a curmudgeonly human that is very much a faximile of Herbert.

I have been asked to remind you that the physical shop is still closed due to the lockdown but Mummy and Daddy are still operating a local delivery and mail order option from the website.  They will be doing this on a Monday, Wednesday and Saturday with a cut-off point of 12noon on the day.