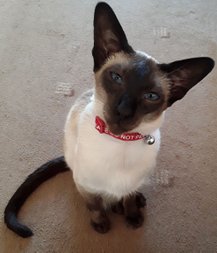 "Sorry if you've missed me but I've been busy"

Hello fans.  I'm sorry I haven't blogged for a long time but I have been very busy and important, I will explain in detail soon. It's a blog so big I've had to split it into bite-sized pieces. If you are new to my amazing life story and wish to follow it, the previous blog can be found here.

April was a strange month.  One minute the stoopid hoomans were all in my face all the time and then one day they just weren't any more.  I could finally reclaim all of my daytime napping spots without being forcebly moved to another place.  Myself and the portly red tabby were elated, the parties could begin again and we could return to a life where no-one judged you for your actions.

You must understand that this was absolute bliss for me but be careful what you wish for, sometimes it can be a curse rather than a blessing.  Yes, I found myself getting increasing bored of sleeping all day, even my dreams were boring.  To this end I decided that I was going to do something productive with my life.

I hunted around the house and found some old technology and decided I was going to write a script for a television series.  The basic premise was the trials and tribulations of a very handsome Siamese cat and his portly red sidekick.  They would chew the fat over life, complain about stoopid hoomans and over the period of the story would create the perfect trap to cause the ultimate feline revolution and the hero of the story would rule the world.

I admit this was a struggle for a start as I have no thumbs, so using the thing in front of the screen with the squiggles that make words was a bit of a mountain to climb.  I found out how to activate the microphone so I could dictate my script but for some reason it was set to a language that I could not use and it just kept placing the word "Meow" repeatedly on my page.

I had to enlist the help of the portly red tabby to assist, he was strangely adept at the use of the computer.  He says it's because he spends time laid next to the hoomans when they are using it and he pretends to nap but has been learning what to do.  He became a kind of ghost writer.

The next three months (whatever they are) were spent honing our craft and perfecting this beautiful story of two incredibly brave and handsome young felines and their plot to bring the demise of the hooman domination of the world.  The twist at the end was perfection and would make M. Night Shayamalan sweat in his socks.

The next challenge was to get some big company to buy the script and turn it into what I would imagine is going to be the greatest story ever told, we would be lauded for our dedication to the craft and offers would come in for more stories from our stable.  Sadly, this was not to be.

We emailed it to every broadcaster and streaming company in the country and we got absolutely nada back.  There is nothing more disheartening than a string of rejections filling your inbox.  However, we haven't given up just yet.  The hoomans were watching TV one morning and this guy Stephen Graham was on there talking about how he and his wife have set up a company that helps people new to the industry break through.  (Stephen Graham, if you don't know is a prolific actor that has been in possibly every single show ever made for television, he's a bit of  a cheeky chap).

We had to do some hard work but eventually found out where to send our script.  It is with them now and we are hoping to hear from them soon.  I do hope that he comes back to us soon, he would be a fool not to!!

So this had kind of been my life for the first three months of this blog, part 2 is here but be warned, you may need a tissue for things take a terrible turn for the worse with your beloved narrator.